To test the optical performance of our main instrument, we have now used a large CCD camera in the telescope focus for the first time. This camera is adapted to the telescope focal length, so that the image sampling is sufficiently good. After we have aligned the mount, we could now try a first shot. The Ring Nebula Messier 57, an easy to find planetary nebula in the constellation of the Lyra, is a good choice. Color filters were not used. The seeing conditions were not very good with about 2.5 arcseconds. The image is composed of 21 images, each exposed for 60 seconds.

First of all, the star images, which are round up to the edge of the image field of about 17 arcminutes, point to a high quality of the Ritchey-Chretien mirror optics. This is especially true given our relatively large CCD chip. The ring structures already show a strong contrast in view of the rather short exposure time, which can be casually explained by the large telescope aperture. The star images on the other hand points to the mediocre seeing. Another hint to the large telescope aperture can be found in the imaged galaxy IC 1296 about three nebula diameters to the right of the Ring Nebula. This spiral at a distance of more than 200 million light years is about 1500 times fainter than a star just visible to the eye in a dark sky. If one walks another two nebula diameters further, one finds another very faint diffuse background galaxy of unknown brightness and distance.

All single images were loaded into the program DeepSkyStacker to stack the best 70%. The result was stretched in PhotoShop (alternately with image correction/gradation curve and image correction/tonal value correction). Then, using the CameraRAW filter, the exposure, contrast, white and black levels were adjusted, haze was removed, and clarity, sharpness and luminance were adjusted. Then processed again with the image correction.

More engineering runs will follow until all systems on the telescope are working reliably. After that we will celebrate! 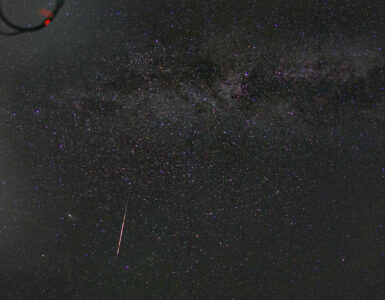 The announced electricity price increases seem to be having a positive effect on our evening skies at the moment. Many outdoor lights simply stay off. The darkness of the evening sky, which was already thought to be... 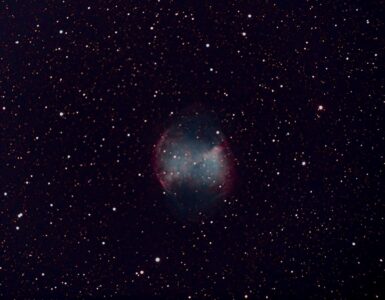 Our first astrophotos in the SchoolLab

In the middle of July we took our first own astrophotographs in the observatory. Before that, we had received an introduction to the controls of the telescope. After taking several pictures of the sun we were already a...